While considering the design of the NFCChat server, one of the components in our little Software Engineering project, the choice of Java struck me as odd. I might be biased, I might be pro-Microsoft, but still – considering that the server is purely console-based, does not accept any input whatsoever, and is, pardon my language, a pain in the ass to use, Java seems to be a bad choice.

Why? Firstly, the server runs off just-in-time compiled code as well as within a Virtual Machine, so that’s a -1 in speed and efficiency. Then the application is purely console-based – completely missing out on the “cross-platform GUI” key feature of Java. And Java being a language designed specifically for network communications isn’t a good reason, there are more languages out there that would have offered more advantages. Safety? The program doesn’t even need user input, why bother? And not to mention the need of installing it’s JRE in each and every computer you need to run it on. Customers don’t like being told, “Oh before this, you need that, that, and that too!” They want to hear, “Throw in the CD, push a button, BAM up and running!”

Guess what I would use? C. Yes, it’s the same language guys 20 years ago use, but it’s good enough for most jobs. Want cross-platform? Check. Speed and efficiency, check. Fast sockets management plus safe code? Oh sure, just be careful. I’m not experienced enough to suggest C++ or even Perl, but yep, they’re viable alternatives too.

It’s worthy to note that a lot of times, coding languages shouldn’t be picked just because you can, but you should – simply judged by a criteria of effectiveness or suiteability. It’s like choosing between a box of matches, gas over and blowtorch to cook a chicken: All of them do the job alright, heck, it’s even quite a feat itself if the fowl turns out edible… but, surely there’s the best tool for the occasion, no?

Sturgeon’s Law says “90% of everything is crud (aka crap)”. I agree, but this is what I wanted to say: 90% of the blogosphere is crap. Internet enthusiasists says that the word 'blogosphere’ itself is overused/overrated/crap. I agree too.

If you’re a fellow blogger, no offense. I’m just pointing out the obvious. Heck, to you this post might’ve got categorized into the 90% litter bin before you’ve even finished the first paragraph too.

Maybe I haven’t been venturing into a lot the top crusts part where higher blogger beings rant about things of a higher purpose enough to see that there’s actually more than a 10% worth reading, in fact, I suspect my rating of 90% is way underrated – but look, I’ll just let you see an example.

Time since release of Google Talk = 3 days.
Look for posts in Petaling Street about release of Google Talk. Noticed a pattern?
Now look for unique posts about Google Talk – i.e not something that goes “wow its true!!11one”, “me like”, “it’s good”, “it does not work gripe gripe” as so on and so forth, but perhaps comments about its useability, musings about how the rumours came true, et cetera.

Caught my drift yet?

The internet was designed as a cache for information, a repository of digitized knowledge. Pockets of mini-networks build up over time around topics of interest, such as our dear aforementioned Google Talk. My point is, there is way too much duplicate and, depending on how you see it, pointless information. To like-minded peers each of the 10,000 reviews from Paris Hilton fan blogs may be invaluable. But to the rest of the non-pop-inspired population, would you care about the 1000th post of her pet dog Tinkerbell getting dumped?

When was the last time you’ve Googled for something, and the first page shows completely irrelevant results, with a whole page of them being blogs? Quod erat demonstrandum, that is.

# Posted in Rants 14 years ago comments

Had nothing better to do wallowing about in the warm little university library while logging on MSN Web Messenger over my laptop on Wifi – and then I realise its bloody troublesome to click on “Sign in using enhanced security” every time. Why couldn’t the guys over at Redmond put extra security as a default, or heaven forbid, at least save my choices with cookies?

FYI, eavesdropping on data sent over Wifi is very easy. Curious what the cute girl in the next sofa is doing on her shiny Dell? Boot up a 'sniffing’ program, and you might even get to read her email.

Anyway, back to topic. It didn’t take too long to realise the only difference between both login pages is just http:// and https://. And what else to automagicalize this process none other than a Greasemonkey script?

A 5-minute affair of copy-paste-edit (1-liner code is from SecureGmail) ensues, and here we go: SafePassport.

What it does is change

# Posted in Code 14 years ago comments 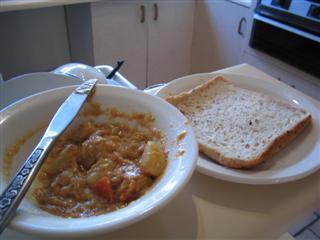 Ideal for the average stuck-in-foreign-country Asian student, who’s either looking for a 5-minutes lunch that doesn’t even need heating up, or too stingy to buy effing-expensive instant noodles!br />
Ingredients:

Not for the weak-stomached though.
# Posted in Rants 14 years ago comments