Thus ends らき☆すた Season 1. :( Where am I going to entertain myself with Konata's antics for the coming weeks?! The ending does wrap up the whole series quite nicely, although like others point out on SomethingAwful, the full OP sequence now looks low-budget compared to Hare Hare. I'll be expecting badly choreographed Akihabara flashmob dances on Youtube anytime soon. (Or 3… 2… 1…) Yutaka and the others did come in a little too late in the series, I can never get used to Patricia's weird high-pitch voice. Also, demanding more Tamura! :/

As a sidenote, kawaii Konata and Kagami models! 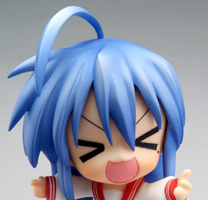 Kagamin can be pretty cute when she's not angry. ^^; 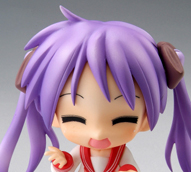 # Posted in Otaku 13 years ago comments